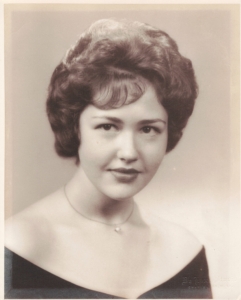 Diana G. Garnett, 78, of Milton went home to be with her LORD, after a long illness.

The daughter of the late Ralph and Mable Nelson of Lincoln County. She graduated from Stonewall Jackson High School in 1961 and spent 30 years of combined service between C&P Telephone Company and Bell Atlantic before retiring in 1992.

Diana is survived by her husband of 59 years, Edward Garnett, Jr. Together they had one daughter, Kelly Casto; and one son, Edward III. She was the grandmother to nine grandchildren, seven boys and three girls, and the great-grandmother to two girls and one boy. She is also survived by her two sisters, Jo Hale and Kim Coleman; brother, Nick Nelson.

Along with her parents, Diana is proceeded in death by her brother, Rodney Nelson.

There will be a service to honor the life of Diana Gail Garnett on Tuesday, September 6, 2022 at 1:00pm at Snodgrass Funeral Home in South Charleston with Chaplain Pete Thompson officiating. A visitation for family and friends will be held one hour prior starting at 12:00pm at the funeral home. Entombment will follow at Graceland Memorial Park.

In lieu of flowers the family asks that donations be made in her name to HospiceCare, 1606 Kanawha Blvd., W., Charleston, WV 25387.

Memories and condolences may be shared by visiting www.snodgrassfuneral.com and selecting the obituary.