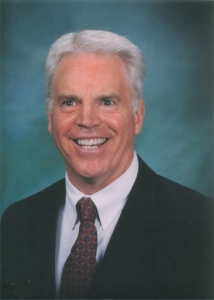 Sam grew up in Charleston, WV and graduated from Charleston High in 1954.  He attended WVU, and joined Sigma Chi Fraternity, and graduated with a BS in Business Administration.  After working with his father at Coffman Optical Co. Sam decided to pursue Optometry as a career and attended Southern College of Optometry in Memphis, TN.  He graduated in 1965 with his Doctor of Optometry degree where he was Valedictorian, a member of the Beta Sigma Kappa International Honorary Fraternity, and the Gold Key Honor Society of Southern College of Optometry.  Sam then opened his Optometric office in Nitro and practiced almost 50 years.  He belonged to the WV Optometric Association during this time.

Sam was an avid golfer at Sleepy Hollow Golf Club, skier, and Mountaineer fan with membership in the Mountaineer Athletic Club.  He officiated high school football for many years and belonged to the Kanawha Valley Officials Association.  Sam was written up in Charley West’s column for the “Coffman Classic” which he held for many years.  He was a long-time member of St. Mark’s United Methodist Church.

Many thanks to all at Kindred at Home Health Services and HospiceCare for all their care and help in so many ways.

A memorial service to honor the life of Sam will be held at a later date at St. Marks United Methodist Church, Charleston with interment following.

Online condolences and memories may be shared by visiting Snodgrassfuneral.com and selecting his obituary.