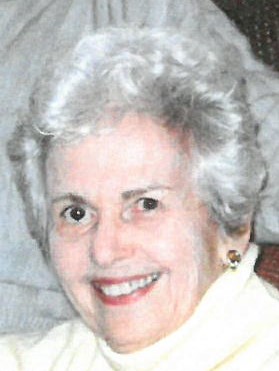 Emma Lou Robinson, a long-time resident of South Charleston, West Virginia, passed away at home on October 14, 2018, after a short but courageous battle with cancer.  She was 91.

Emma was born in Charleston on October 27, 1926, the daughter of Elmer and Sybil (Burgess) Legg.  She was preceded in death by her parents, her husband, E. Glenn Robinson, and her son, Richard Robinson.

Emma attended Charleston public schools and graduated from Stonewall Jackson High School.  She and Glenn were married in 1947, after which she worked as a legal secretary in Columbus, Ohio and Charleston, and as an assistant to Charleston Mayor John T. Copenhaver, before bravely taking on the task of four newly minted children over a five year period beginning in 1956.  Emma epitomized the best of her generation: smart and witty, tough but compassionate, taskmaster and helper, the very picture of style and grace, and a truly terrific wife, mother, grandmother, daughter, sister, role model and friend.  She split much time between her South Charleston home of over 60 years and her mountain country home in Green Bank, and in between managed to travel the world.  She was an avid reader, loved getting dirty in the garden and while tending her roses, was passionate and talented in the kitchen, and took great joy in passing all those things along to future generations.

Her family would like to thank the gifted teams from Visiting Angels and HospiceCare for the love and care they gave Emma, and for their support of the family, during this trying time.

A celebration of Emma’s life will be held at 2:00 pm Friday, October 19, 2018 at Snodgrass Funeral Home with Rev. Sharon Gearing officiating.  Interment will follow in Sunset Memorial Park, South Charleston. Family and Friends may visit one hour prior to the service at the funeral home.

Memories of Emma may be shared by visiting snodgrassfuneral.com and selecting the obituary. Snodgrass Funeral Home is assisting the family with these arrangements.