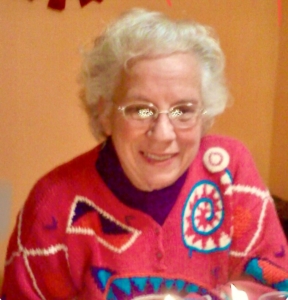 Elma Anna Bailes Marshall,93, of Charleston passed away September 14th at CAMC Hospice Care, after a short illness. She is preceded in death by her husband, John W. Marshall, and nine brothers and sisters. She is survived by her son James Marshall and two daughters; Gail Bass Wilcher [Scott] and Cheri Schwarz. All from Charleston. She has nine grandchildren: James Marshall of Martinsburg; Andrew Marshall of Indianapolis, IN; Mary Katherine Dinger [ Eric] of Indiana, PA; Thomas Marshall of Morgantown; Richard Bass of Georgetown, KY; J. Marshall Bass [Beth] of Glasgow, Scotland; Reny Wilcher of Lewisburg; Devon Schwarz and Dylan Schell of Lexington, KY; and Gary Schwarz [Ali] of Austin, TX. She has three great grandchildren Eric and Zachary DInger and Charlotte Bass.

Elma was born on January 9, 1929. She was the youngest of ten children born to E.J. and Della Bailes of Nitro, where she grew up. She graduated from Nitro High School in 1946. Later that year she met the love of her life, John Marshall, a young Marine returning from World War II. They married in 1947. Elma worked at Monsanto for five years until the birth of her son. Two daughters followed and their family was complete. They moved to Charleston in 1960 and purchased a home, where Elma lived until her death.

Elma was an excellent cook. There was always at least one extra mouth to feed at her table. Her warm and caring nature made the Marshall home a great place for kids to hangout. Everyone was welcome. She continued to feed her grandchildren and their friends when they were in high school. She could do hamburgers and French fries at the drop of a hat. She was a Homeroom Mom, Cub Scout and Girl Scout Leader and was always ready to help with her kids’ activities. She was an excellent seamstress and made most of her daughters’ formal dresses. She loved playing Bridge and belonged to several Bridge clubs. When her children were older, she worked as an office manager and bookkeeper for her husband’s company, Ted Keiffer &Co. When John passed away in 1990, she became a fulltime mother and mamaw, always willing to babysit or help with home decorating projects. She will be sadly missed by her many nieces and nephews as well as her immediate family.

A memorial service will be held on October 15,2022, at 3:00 pm, with visitation beginning at 2:00 until service time. Snodgrass Funeral Home of South Charleston is handling the arrangements.

Memories of Elma may be shared by visiting her obituary at Snodgrassfuneral.com.