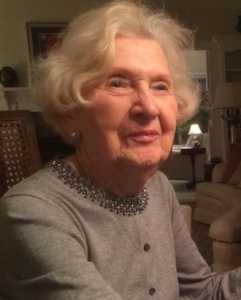 Antoinette Louise Susa Cappellanti, a former resident of Morgantown, WV, passed away on September 16, 2022 in Charleston at the age of 94.

Her parents John M. and Mary Ann Susa were eastern European immigrants who made a wonderful life for their family in Adah, Pennsylvania. She graduated from German Township High School in Pennsylvania and the Morgantown Business College in Morgantown. A diligent and hard worker, Antoinette was employed by the Monongalia Power Company as an administrative assistant to the commercial supervisor. While her husband August was stationed at Fort Sam Houston with the U.S. Army, Antoinette worked as a civilian executive assistant to the Comptroller and the Commanding Officer of the San Antonio General Depot. They returned to Morgantown in 1955, proudly raising their three daughters while she and her husband operated Cappellanti’s Grill, an iconic Morgantown establishment, until 1991. Antoinette and August traveled extensively in Europe after his retirement. After her husband died in 2004, she moved to Charleston to be near two of her daughters.

Antoinette loved traveling with her daughters and their families and was always up to trying new things, including parasailing in her 80s. She was the personification of grace and elegance. Her greatest joy was spending time with her children, grandchildren, and their friends. She was a proud and loving mother to Ellen Cappellanti (Mark Carbone), Laura Cappellanti Barber (James), and Amy Cappellanti-Wolf (Doug). She had ten grandchildren: Stephen Carbone (Erica), James Carbone (Amanda), Michael Carbone, Kristen Barber Kelly (Nick), Caitlin Barber, Kathleen Barber Eaton (Ryan), Conner Barber, Karlea Barber, Olivia Wolf, Chloe Wolf, and three great-grandchildren Ella, Ethan, and Emilia.

Antoinette is survived by her brother-in-law Robert Martino of Indiana and numerous nephews and nieces. She was preceded in death by her husband, August, in 2004 and by her five sisters and three brothers.

Memories and condolences may be shared by going to www.snodgrassfuneral.com and selecting Antoinette’s obituary.

Snodgrass Funeral Home of South Charleston is honored to be assisting the family with arrangements.