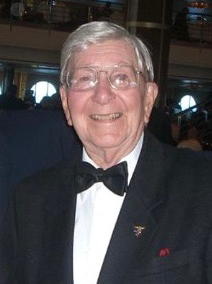 Dr. Charles Leslie Lake was 100 years old when he passed peacefully into the presence of the Lord on December 4, 2021. He spent his last few years in the care of his son, Terry, and Terry’s partner, Peggy Warner. They divided their time between South Charleston, WV, Treasure Island, FL, and Roanoke, IN, where he passed away.

Charles was born at home and was an only child. He graduated from Charleston High School and then attended Eastern Kentucky College for two years. He then enrolled in dental school at the University of Louisville. Immediately after his graduation there, he joined the army and served in the dental corp during WWII.

While practicing dentistry, he was also active in the West Virginia Dental Association and was proud to serve as their president. As a member of the National Board of Dental Examiners, he administered tests for dental students which had him traveling from Chicago to the eastern coast of the United States. He was also a dedicated member of the Lions Club and the Shriners. He was an avid golfer and enjoyed socializing with his many golf buddies at Kanawha Country Club. He won tournaments into his senior years leading his wife, Lucille, to declare, “Don’t bring home any more trophies unless you intend to polish them yourself.” He also loved bragging about his numerous holes in one.

To hear him tell it, his marriage to Lucille was a fairytale love story. They met when she was already engaged to another man. He persisted in his courting of her, and the two married in 1945. She was supportive and loving during their life together. They raised three sons and celebrated their 50th wedding anniversary with a red golf cart instead of the traditional golden anniversary gifts. In 1996 Lucille was diagnosed a second time with cancer and passed away.

Charles’ oldest son, David, was a businessman, and together with his wife, Cody, owned multiple businesses including Minuteman Press in South Charleston.

His second son, Terry, was his dental partner at Lake and Lake Dentistry for several decades. Charles recalled one of many proud moments watching Terry being inducted into the International College of Dentists. Together they attended a meeting of the West Virginia Dental Association every summer at the Greenbrier making it a family holiday that soon became a tradition. Charles’ pride grew generationally as his grandson, Jeremy Lake, continued the family tradition of practicing dentistry.

Charles’ youngest son, Tom, became a dental technician providing dental prostheses for some Lake and Lake patients as well as other dental practices. In retirement, Charles enjoyed his time in Florida and was able to visit with Tom, Dianna, and grandsons, Alexi and Tasso, more frequently.

Charles loved telling stories and was a true oral historian though he admitted that he embellished some of his stories as he re-told them many times. His stories span across the generations of his family to his grandchildren and great-grandchildren. This past summer, he gathered together with family at the Greenbrier for a final family celebration of the tradition. He was able to tell his four great grandchildren stories and make new stories with them that they will remember forever. His family feels fortunate to have 100 years of stories to remember him.

A service to Honor the Life of Charles will be held at 12:00 Noon, Friday, December 10, 2021 at Snodgrass Funeral Home, South Charleston, with Rev. Jamie Strickler officiating. Entombment will follow in Cunningham Memorial Park, St. Albans, WV. Friends may visit one hour prior to the service at the funeral home. We respectfully request that all in attendance wear masks while inside the funeral home and mausoleum chapel.
Services will be live streamed, visit www.snodgrassfuneral.com and select the “live stream” button under the obituary photo, when the service begins the live stream will open automatically.

Memories may be shared by visiting www.snodgrassfuneral.com and selecting the obituary. Arrangements are in care of Snodgrass Funeral Home, South Charleston.