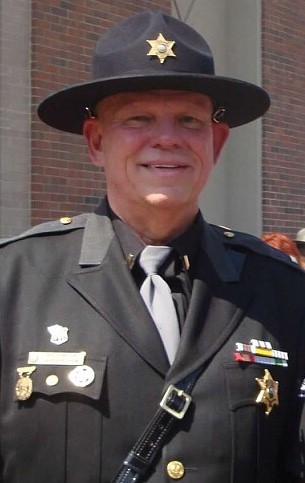 Terry Lee Miller, 71, of Charleston, lost his 6+ year battle with brain cancer Tuesday, July 31, 2018, at the Hubbard Hospice House with his loving family by his side.  Born September 10, 1946, in Parkersburg, Terry was the son of Barbara Jean Miller Dennis of Belpre, Ohio.  Preceding him in death was his precious grandmother, Winnie O’Dell Oliver; brother, Dale Eugene Miller; and infant son, Michael Miller.

Terry retired as a Lieutenant from the Wood County Deputy Sheriff’s Office in July 2004 and moved to Charleston to marry his wife and continue his career. He actively worked on the campaign, and thereafter, for Governor Joe Manchin where he served as the Director of Homeland Security during Hurricane Katrina, and as the Executive Director of the Regional Jail Authority.  He also continued to work as a police officer for the Kanawha County Parks and Yeager Airport, and was currently employed with the Kanawha County Sheriff’s Office as a civilian employee.  He served with honor for a total of 43 years as a law enforcement officer.

Terry was extremely proud to serve as the State President of the West Virginia Deputy Sheriffs Association for 16 1/2 years. He also served on the Governor’s Law Enforcement Training sub-committee; as President of the Wood County Deputy Sheriff’s Association; Second Vice-President, Secretary and Chaplain of the Fraternal Order of Police, Blennerhassett Lodge 79; and as a Trustee of the WV Investment Management Board.  However, it was his service as a board member on the Consolidated Public Retirement Board that led him to meet his wife, Terasa, and, in turn, require him to submit his resignation from the Board in order for her to agree to go on a date.

Terry not only had a distinguished career in law enforcement, but was the driving force behind many legislative efforts that affected deputy sheriffs and law enforcement officers across the State of WV.  He proudly lobbied the Legislature for deputy sheriffs and other law enforcement officers for over 40 years.  His most cherished accomplishment was his involvement in the creation of the Deputy Sheriff Retirement System in 1998, and the legislation passed (SB 501) during the 2018 Legislative session which significantly increases the retirement benefits for current and future deputy sheriffs across the State of WV.  What a wonderful achievement to occur prior to leaving his earthly body.

Visitation will be held from 1:00 to 4:00 p.m., Saturday, August 4, at Bible Center Church, 100 Bible Center Drive, South Charleston, WV, 25309.  A memorial service celebrating his life will begin at 4:00 p.m. with Pastors Matt Friend and Richard Thompson officiating, and Pastor Robert Ballard blessing us with song. A committal ceremony will follow at the Donel C. Kinnard Memorial State Veterans Cemetery.

The family wishes to express their gratitude to the compassionate physicians and staff of the Duke Cancer Center, specifically Dr. Annick Desjardins, CAMC Cancer Center and CAMC Memorial 5 South.  In addition, a special heartfelt thank you to J. Michael Adkins for without his constant friendship and care throughout this medical journey, Terry would not have survived for as long as he did.

In lieu of flowers, please consider memorial donations for the college fund of Teagan and Terynn Miller.  Checks must be made payable to Terasa Miller and mailed to: Huntington Bank, 280 Southridge Blvd., South Charleston, WV 25309. Please write in the memo line “Miller College Fund”.

Memories of Terry may be shared by visiting snodgrassfuneral.com and selecting the obituary.  Snodgrass Funeral Home is in charge of arrangements.