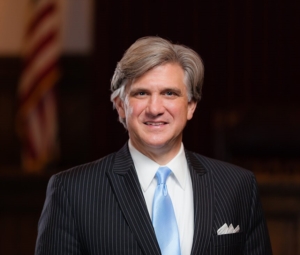 Sean was a devoted son who called his parents daily to share his sons’ achievements and discuss his family and work. He treasured his beloved grandparents Patricia Noel McGinley and Frank Howard McGinley. His family uses the words “selfless, generous, reliable, kind, dedicated, honorable” to describe Sean.

Sean and his loving wife Ana Gloria Marino were married on May 12, 2001, at First Presbyterian Church, Charleston, West Virginia.  Sean was a devoted and loving husband and father to sons Liam Patrick McGinley and Colin Sean McGinley.  Sean enjoyed spending time with his family both at home and traveling around the United States, Italy, Ireland and England.  Sean and his boys enjoyed many hours fishing and skiing together in West Virginia and Colorado.

Sean coached his boys’ sports teams and was a fixture at his boys’ soccer, baseball and basketball games.  His sons’ recall their father’s insistence as a little league coach that every boy had an opportunity to play in every game, that he believed that each should have fun playing and that he emphasized sportsmanship and respect for officials, opposing teams and each other.

Sean spent his early years living in Pittsburgh, Pennsylvania, where his life-long love of baseball began.  As a boy he loved to wear his Pittsburgh Pirates uniform and attend games with his father and grandfather Frank H. McGinley. At age 7, Sean and his father attended a Pirates game at Three Rivers Stadium where Sean saw his all-time favorite player Roberto Clemente’s 3,000th hit.

Sean and family moved to Morgantown, West Virginia in 1975, where he attended Cheat Lake Elementary and Jr. High School and St. Francis DeSales High School (1983). He carried his baseball glove everywhere he went, tossing the baseball in the backyard with his father and friends. He watched Pittsburgh Pirates games on TV, recording every possible statistic and tracking each player’s batting average.

Sean played baseball throughout his childhood and for his high school and college teams and was “by far the fastest player on the Oberlin baseball team,” according to his teammates.  Sean loved music and sang in junior high musicals. Sean was a camp counselor at Pioneer Ranch Camp, in Tionesta, Pennsylvania, where he paddled over 500 miles on the Allegheny River earning him the coveted “Golden Paddle.”

From boyhood, Sean loved to travel with his family and friends on road trips across the U.S. His later travel led him to bungie jump in New Zealand, explore South Africa and Kenya and Tanzania, England and Europe.  Sean enjoyed gardening and delighted in decorating his home every Christmas season.

Sean attended Oberlin College (A.B. History, 1987) with his cousin Douglas Strawbridge and Gina (Scalzi) Strawbridge. He shared many experiences with his cousin and close Oberlin friends who recall his “boisterous one of a kind laugh that bounced off the walls,” how he “loved to debate constitutional law (seemingly all the time),” and “was beloved by professors, coaches, and other students for his charisma, affability, tolerance, forthrightness and toughness.”

Sean attended Oxford University’s Keble College where he earned a law degree (2nd, LL.B. 1990).   While attending Keble College,  Sean enjoyed Oxford traditions including rowing with the Keble College Boat Club, bicycling about town, and enjoying the camaraderie of friends at Oxford pubs including the Eagle and Child (meeting spot for CS Lewis & JRR Tolkien) that Sean affectionately referred to as “The Bird & The Baby.”

After graduation, Sean returned to West Virginia where he lived for the remainder of his life.  A member of a family of seven lawyers including his parents, sister and grandmother, Sean was also blessed with extraordinary mentors as he began a career at the bar.  He served as law clerk for two Justices of the West Virginia Supreme Court –  Justices Thomas McHugh and Justice Thomas Miller. Building on their guidance and deep sense of justice, Sean then served as a personal law clerk for Charles Haden II, Chief Judge of the U.S. District Court, whose profound integrity and sense of ethics provided benchmarks for Sean’s life in the law.

Sean joined the law firm of DiTrapano & Jackson in 1995, and served as managing partner of DiPiero, Simmons, McGinley & Bastress.  There, Sean represented the people of West Virginia seeking to hold prescription opioid manufacturers and distributors responsible for the untold misery they visited on the state and nation. Sean passionately believed in our constitutional right to free speech, religion and a free press.

He frequently represented newspapers and media (sometimes with his father) including the Charleston Gazette-Mail and the Associated Press seeking to enforce open meetings and public disclosure laws. Sean also compassionately represented injured persons and families who survived untimely and senseless deaths of loved ones.

Nurtured by his church, his parents and grandparents, Sean embraced and deeply believed in racial and social justice and equality. For Sean, the essential and profound truth of faith is found in the admonition: “So in everything, do to others what you would have them do to you.”

A memorial service will be held on Friday, June 11, 2021, at 2:00p.m. at First Presbyterian Church of Charleston, West Virginia. Covid masks are required. The family will receive visitors for one hour before the service and briefly after the service.

Donations in lieu of flowers may be made to Charleston Catholic High School for tuition support, the First Presbyterian Church, Mountain State Spotlight, or any charity of your choice.