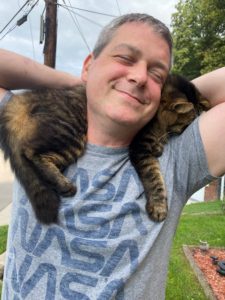 In his 42 years on this earth, Mark William Brown entertained nearly everyone he met. Whether family, friend or complete stranger, Mark’s wicked wit could put a smile on your face no matter the circumstance.

Mark was born on October 24th, 1978, in Charleston, WV to Ruth Siders Brown and the late William Riley Brown. “Marky” was raised in a house full of humor, history and love for animals. His love for his parents and brother (his first best friend) was fierce and unwavering. A talker from the start, Mark built many lifelong friendships from an early age and made an impression on everyone who encountered such a caring, articulate and curious boy.

He attended Dupont High School, where he was actively involved in trivia and was a member of the soccer team. It was here that “Brownicus” continued to develop friendships that he maintained throughout his life. Mark went on to attend Marshall University, where he became an avid Herd fan and statistics buff. He enjoyed spirited online debates as “Herdalicious” on the Marshall message boards.

Mark began his career at Arnett and Foster, where he expanded his circle of friends before entering the world of advertising at The Arnold Agency. It was at the Arnold Agency where he found an instant connection with Mary Mohn, who would become his wife. Mark and Mary shared an obtuse sense of humor and an absolute love for one another’s best and worst.

Surprising himself and everyone he knew, Mark became the father of twins. His daughter Eleanor, whom he affectionately dubbed “Easy E”, “Monkey” and “Baby Bibbles” enjoyed many Daddy-Daughter days. His son Anderson, or “Ders” was Mark’s “buddy” and recipient of much love and lessons on trolling your friends and enemies alike. As a stay-at-home Dad for their first years, Mark discovered a love for children and was magnetic with his own children and many of their friends.

Mark was an incredible father and the best damn cat dad there ever was. Shortly before meeting Mary, Mark met the love of his life, a tiny dumpster tortie that he named Iffle Biffle, or “Iffy” for short. He was also cat-dad to L’il Miss, Richard Jefferson (Jeffy), and Floof, giving them baths they didn’t want and doing their nails for the benefit of all.

Many knew Mark as the friendly print salesperson from Morgantown Printing and Binding, where he was a welcome face to many clients that were more like friends. He enjoyed yardwork and entertained many neighbors and passersby with his voice that echoed far and wide.

Mark was a loyal friend, neighbor, cousin, brother, partner, daddy and baby boy, with a sense of humor that could always lighten the load and lift everyone around him. While Mark could at times be full of himself, he was humble to his core and could never know how much love we all had for him.

Mark is survived by his loving wife, Mary; his twins, Anderson and Eleanor; Mother, Ruth; brother, Michael and sister-in-law Stephanie Brown and countless others that may not have been family, but meant so much to him. He was preceded in death by his father, Wiliam, and many furry friends, including Amy Elizabeth, Muffy Marie, Barney, Honey and Iffle.

Friends, family and all who loved him will gather at Snodgrass Funeral home on Saturday September, 25th 2021 from 4 to 6 pm to share stories and remember his spirit that lit up when he spoke about all of those he loved. All of us who knew him were so fortunate to have him in our lives. He would have wanted us to laugh through the tears as he looks on from whatever pool he is now floating in, with that infectious smile of his.

We respectfully ask, for the safety of yourself and others, that you wear a mask while inside our facility and practice social distancing.

In lieu of flowers the family requests donations be made to the Kanawha Charleston Humane Association.