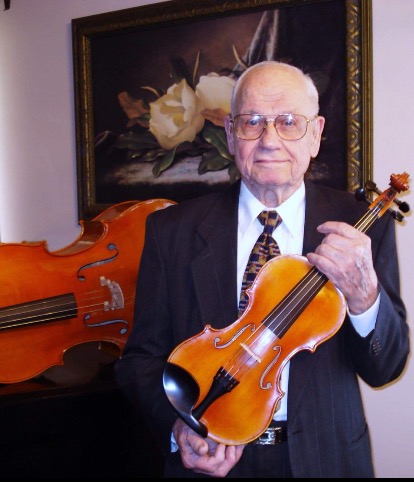 Born in Putnam County, WV, on December 26, 1917, Harold is the son of James and Maude Mae Hayslett.  He was married to Louise Carpenter Hayslett for 64 years until her death in 2010.  Harold was predeceased by all his siblings:  Arnatha Lawson, Daryl Hayslett, Janet Joyce and Paul Hayslett.

During World War II, Harold served as Staff Sergeant in E Troop of the 106th Cavalry Squadron of the Third Army in France for four years. After the war he and Louise moved to South Charleston where he worked at Carbide and she served as the city librarian.  They were active members of First Baptist Church of South Charleston.

Known as an award-winning luthier, Harold made 86 violins, 14 violas, 65 cellos, one bass viol and 6 bows some of which are played in symphonies worldwide.  At the Violin Society of America International Competition and Exhibition in 1980, Harold was awarded the gold medal for cello tone.  He was included in the Governor’s Arts and Letters Series in 1991.  In 1996, a video Building a Cello with Harold was released.

In 2016 Harold was presented with the Governor’s Arts Award.  He is included in the West Virginia Encyclopedia, has a permanent exhibit at the West Virginia Culture Center and is listed in The Violin Makers of the United States.

Visitation will be at Snodgrass Funeral Home in South Charleston from 1:00 pm to 3:00 pm on Sunday, February 18, 2018 followed by a prayer service officiated by the Reverend Hilda Alsop. Music will be provided by Bobby Taylor, Joseph Cevallos, and David Fortner.  Burial will follow the service in Teays Hill Cemetery, St. Albans.

Online condolences may be sent through Snodgrass Funeral home at snodgrassfuneral.com