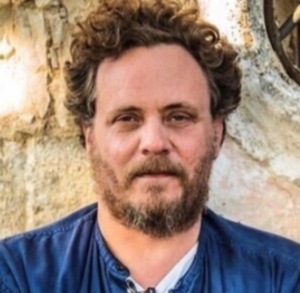 Gian was born on January 30, 1974, in Charleston, West Virginia. He was the son of the late Rudolph Lidano DiTrapano, and Martha Veazey DiTrapano, who survives him. Gian was also preceded in death by his brother, Lidano Albert DiTrapano.

Gian is survived by his husband, Giuseppe Avallone, his mother, Martha, sisters, Luisa DiTrapano (Cy), Lia DiTrapano Fairless (L.J.) and brother, Dante’ diTrapano (Teri). He has numerous nieces and nephews, who were crazy about him and loved him dearly.  He also had extended family and many close friends in Italy.

In 2006, Gian founded New York Tyrant Magazine, a literary journal which garnered a substantial cult following. In honor of his older brother, whom he admired and missed every day, he established the Lidano Fiction Award which was bestowed upon a story in the quarterly.  The prize included a round-trip plane ticket to Italy and a week at Villa DiTrapano, the family home in Sezze Romano, an idyllic hilltop village equidistant between Rome and Naples in the ancient Latina countryside, with a view of the Tyrrhenian Sea.

In 2009, the magazine transitioned into Tyrant Books, an independent publisher which he single-handedly ran from his apartment in Hell’s Kitchen, until partnering with Fat Possum Records in 2013. In a rave review for Steve Anwyll’s debut novel, Welfare, in 2019, the Washington Post said, “Tyrant Books, an indie publisher of exacting left-of-center fiction, has recently stepped to the forefront of progressive literature.” Gian had an uncanny ability to find and champion new authors, always anticipating what was next, and continually publishing work which the larger houses refused to touch.

Scott McClanahan said, “In the years to come, it will be acknowledged, Gian helped shape and change the literary culture of the 21st century.”

Tyrant went on to publish books including Preparation for the Next Life by Atticus Lish, which won the 2015 PEN/Faulkner award; what purpose did i serve in your life by Marie Calloway, which printers initially refused to print; The Sarah Book by Scott McClanahan; LIVEBLOG by Megan Boyle; The Complete Gary Lutz by Gary Lutz; and Essays and Fictions by Brad Phillips. In 2016, New York Tyrant Magazine was brought back as an online literary magazine, with Jordan Castro as editor. Gian was known as a legendary editor, who stood alone in publishing as one singularly willing to take risks, and to stand outside of the sanitized literary landscape to publish bold and innovative fiction.

He was also a writer, journalist and teacher, and his own searching, vital and deeply sensitive work appeared in the Paris Review, Playboy, VICE and Thought Catalog. He taught fiction writing and editing at Catapult, and lectured on writing and literature in both English and Italian.

He was the co-founder, with Chelsea Hodson in 2017, of MORS TUA VITA MEA (your death, my life), a week-long writing workshop that occurred twice per year at Villa DiTrapano in Italy. Students traveled from all over the world to work with Gian, who was known for his brilliant editing skills, affable nature, and impeccable taste in books. Gian’s husband, Giuseppe, cooked meals for everyone at the villa, and, as resident cultural curator, he also helped explain Italian history when the group went on nearby excursions to abbeys, temples, and historic sites such as the Garden of Ninfa and revealed enriching new layers of meaning and context. Alumni of the workshop have often spoken about how much their experience at Villa DiTrapano changed their lives for the better—it was a place where new ideas could flourish and students could gain a new perspective on their writing. Journalist Chiara Barzini profiled Gian and Chelsea for Vanity Fair Italia in 2018 with the headline, “There’s a Genius in the Castle,” going on to write that, “they have created a workshop that follows its own rules and is creating tomorrow’s literature.”

Gian was drawn to Rome, Italy, and Sezze Romano, where his paternal grandparents emigrated from, and to which the family retained strong ties. He himself felt very connected to the land. He made his home with Giuseppe in Rome in 2016 and they moved to Naples two years later, inspired by the city’s energetic renaissance and exciting creative opportunities for both of them.

Gian was charming, stylish, compassionate, intelligent, personable, generous, carefree, sweet, hilarious, occasionally reckless, and full of love and light. He lived life to the fullest. Anyone who was fortunate enough to know him and spend any amount of time with him ended up loving him. He was blessed with many friends who loved him and whom he loved. You know who you are.

In lieu of flowers, donations may be made in Gian’s honor to Mountain State Spotlight (mountainstatespotlight.org), a civic journalism project for and by West Virginians that he admired and read regularly.

Due to Covid, a private service is being held.  You may view the service by visiting www.snodgrassfuneral.com, select Gian’s obituary, then select the “Live Stream” button under his photo. The live stream service will begin at 1:50 pm, Tuesday, April 6.

Memories of Gian may also be shared when visiting the obituary.  Arrangements are in care of Snodgrass Funeral Home, South Charleston.