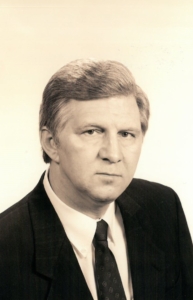 Mr. Toney was a 1961 graduate of Sherman High School, and a 1965 graduate of the University of Charleston, formerly Morris Harvey College.  Gary worked at Columbia Gas Transmission where he was an accounting supervisor until 1991 when he retired.

Gary’s life passion though was the world of boxing.  In 1958, Gary began boxing on the local level.  He was coached and mentored by Lloyd Banks, whom he deeply admired and looked up to fondly.  In his amateur career he earned five Golden Glove Championships.  In 1967 he stepped out of the ring as a fighter and into it as a coach.  Over his many years of coaching, he mentored numerous boxers at the local, state, and national level.  He was USA Boxing Team President from 1996-2000, where he also served as secretary and treasurer.  Mr. Toney also served on the United States Olympic Committee Board of Directors from 1996-2000.  In 1999 until 2000, Gary also was the team leader of the United States Olympic Boxing Team, where he brought home boxers who won numerous awards, including silver and bronze medals.in Sydney, Australia Olympic games.  In May 2009, Mr. Toney opened up Hometown Heroes Boxing and Fitness Gym.  He served as owner and President of this organization, until it closed in late 2020.  Mr. Toney was a strong advocate for youth boxing and he was influential in introducing female boxers into the amateur ranks of boxing.

Throughout his life, Gary Toney lived by a strong work ethic and moral code.  He strived to push others to live fully and purposefully.  He was greatly loved by his family, friends, and the boxing community as a whole.  In lieu of flowers donations may be made to the GARY E. TONEY LEGACY AWARDS, make checks payable to Connie Toney, 809 Wisteria Drive, South Charleston, WV  25309.

Memories of Gary may be shared by visiting www.snodgrassfuneral.com and selecting the obituary. Snodgrass Funeral Home is handling the arrangements.