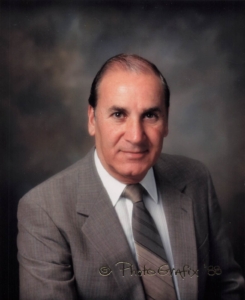 Frederick James “Fred” Joseph, age 93 of Charleston, West Virginia, passed away peacefully with his loving wife Sara by his side on Thursday, July 28, 2022.

Fred, the son of Ameen and Nahia Joseph, was born February 7, 1929, in Eskdale, West Virginia.  He was preceded in death by his brothers Ameen “Joe” Joseph, Jr. and Adle Joseph and his sisters Waudad Ameen, Idell Hamady, and Lucille Joseph.

Fred graduated Charleston High School in 1947 and attended Marshall University where he studied Business Administration.  In 1951, he was called to active duty and served two years in the Korean War.  Upon his return, he joined his father, brothers Joe and Adle, and brother-in-law William Hamady to form the grocery company Big Star Supermarkets, which expanded into 10 supermarkets throughout southern West Virginia.  Fred married Sara, the love of his life, in 1959.  They had 63 wonderful years together.

Fred was a member of the First Presbyterian Church of Charleston, the AF&AM Malden Lodge #27, Beni Kedem Shrine Temple, and Royal Order of Jesters.  He was an avid golfer and enjoyed bowling.  He will be remembered as a kind, patient, no-nonsense, hard-working gentleman.  He is beloved as a good father, grandfather, husband, and friend to many.

The family would like to thank all who lovingly cared for Fred toward the end of his life.  Special thanks to hospice and his caregivers Shawna, Lee, and Samantha, as well as the beautiful tribute CHAMR gave for his life’s accomplishments.

Memories of Fred may be shared by visiting snodgrassfuneral.com and selecting the obituary. Snodgrass Funeral Home is assisting the family with these arrangements.