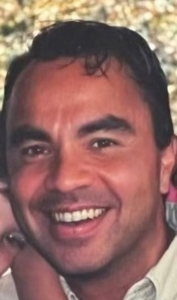 David A. Rubio, a longtime Charleston resident and owner and CEO of Imagine Medispa, passed away on July 17, 2022. He was the brother of Kimberley Ballard of Salem, MA and John Rubio of Howell, MI. He also leaves one nephew, Dominic Ballard, and two nieces, Olivia Ballard and Emily Rubio, as well as many, many friends, including dear friends, Treasa Udy, Matt Felber, and Diane Scarbro, and Eric Lassila. He is the former husband of the love of his life, Kathy Rubio, and loving Papi to Melissa and Ken Bailey who made him so proud and gave him such joy.

Born in New York, David grew up in Michigan and was a proud alumna of the University of Michigan. David was a passionate sports fan who could often be found with a cigar in hand, spewing colorful language to cheer on his favorite teams – the Michigan Wolverines and the Detroit Red Wings in particular. David was a phenomenal caretaker to his beloved dogs: Beatrice, Pinky, Patty and McGee, and made them the center of his life.

A big-hearted and engaging friend, David loved telling a good story, usually over a delicious Italian dinner, surrounded by friends. As the head of Imagine Medispa, he was known for his kinetic energy, joking manner, and expansive personality. He never viewed his colleagues as anything but family and treated them as one of his own. David was proud that Imagine Medispa’s 5 locations employed many people in West Virginia and felt responsible for their well-being. His laughter, generosity, and love of the good life will be greatly missed.

A memorial service will be held by his family at a later date.

Memories may be shared by visiting snodgrassfuneral.com and selecting the obituary. Snodgrass Funeral Home is assisting the family with these arrangements.