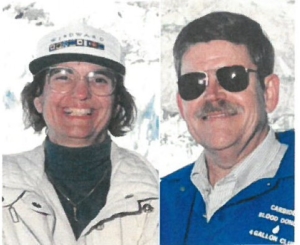 Cyron Tanner Lawson, 79, and Patricia Ann Emmer Lawson, 77, both of South Charleston, WV, passed away on June 1, 2021 in an automobile accident near their home.

Cyron and Patricia met in Atlanta, Georgia while he was attending Georgia Tech and she was at Agnes Scott College. They have been college sweethearts ever since. They were members of St. Christopher Episcopal Church in Charleston and are survived by their children, Matthew and Debbie Lawson both of South Charleston.

Cyron, was born in Spartanburg, SC to the late Adolphus Lawson and Mary Tanner Lawson. He was a Chemical Engineer and retired from Dow Chemical, formerly Union Carbide.  Cyron is also survived by his brother, Kenneth Lawson of Spartanburg, SC as well as nieces and nephews.

Cyron was an avid soccer enthusiast and traveled to England on several occasions to watch matches.

Patricia, was born in New Orleans, Louisiana the only child to the late Lloyd Emmer and Emily Gerde Emmer. She was retired from Kanawha County Schools where she was the Librarian for Alum Creek Elementary School. Patricia is also survived by her cousin, Kevin Pichon and children.

Tish enjoyed her weekly book club, was an avid reader. She took water aerobics classes for several years and was an avid walker. She also helped with Meals on Wheels. She truly enjoyed her trips to the symphony and visiting the Clay Center.

Tish and Cyron were founding members of All Saints’ Episcopal Church in South Charleston. There they both served on the vestry, taught Sunday school, served on the alter, and Cyron was the treasurer and accountant. They both trained acolytes and members to serve on the alter. When All Saints’ merged with four other Episcopal churches to form Saint Christopher, Tish and Cyron continued as vestry members, alter guild, teaching Sunday School, and Tish served as the fellowship committee chair, which provided weekly coffee hour brunches after the services as well as providing receptions for various events. They both served as readers for services. They truly loved their church and worked tirelessly behind the scenes not drawing attention to themselves.

Both Tish and Cyron were world travelers and enjoyed seeing new places and making new friends. They will truly be missed not only by their children but their church family as well.

A private memorial service to Honor the Lives of Cyron Tanner and Patricia Ann Emmer Lawson will be held at St. Christopher Episcopal Church, Charleston, WV.

In lieu of flowers the family suggest donations be made to St. Christopher Episcopal Church, 821 Edgewood Drive, Charleston, WV  25302.

Memories may be shared by visiting www.snodgrassfuneral.com and selecting the obituary.  Arrangements are in care of Snodgrass Funeral Home, South Charleston.