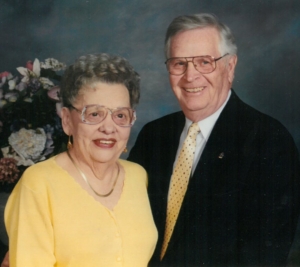 Cliff Asbury, age 100 of Charleston, passed away Saturday October 16, 2021 at Kanawha Place, Charleston after a short illness.
He was born in Ashford, WV, son of the late Lovely Clarence and Emma Blanche Williams Asbury. He was also preceded in death by his wife of over 50 years, Dorothy Asbury, son, Jeff Asbury, and daughter, Jan Gentry; brothers Damon Asbury and Virlin Asbury, sister Arlene Elkins and second wife, Jean Guthrie.
Cliff served his country in the US Army during WWII in the Pacific Theatre as a radio operator and was a part of the Amphibious Unit in the Pacific where he drove boats that dropped off troops on land. He also did Reconnaissance Missions on the islands where his team would scout and map out the island to see where was the best place to invade. He retired as a lab technician from Union Carbide with 50 years of service. Cliff was a dedicated family man, known for his beautiful woodwork and carpentry skills. Cliff also enjoyed playing golf, much of that at Kanawha (Little Creek) Country Club.
Cliff’s life will be forever cherished by his daughter Jody (Melissa Burrows) Asbury of South Charleston, daughter in law, Rhonda Asbury of Summersville; sisters, Imogene Arden of Nitro, and Deloris Hill of Lens Creek, grandchildren Amy Jo Hickey (Justin Southworth) of South Charleston, Josh Asbury (Janae) of Summersville, Lauren (Charlie) Thomas of Amherst, VA, Rachael (Nathan) Kelly of Scott Depot, and Jacob Asbury of Summersville, and many Great Grandchildren.
A memorial service to honor the life of Cliff will be held at 1:00 pm on Friday October 22, 2021 at Snodgrass Funeral Home with Pastor Dana Gatewood officiating. Entombment will follow in Sunset Memorial Park, South Charleston.
The family will receive friends from 12:00 noon until 1:00 pm on Friday at the funeral home. We respectfully ask that anyone in attendance wear a mask while inside the funeral home and mausoleum chapel at the cemetery.
Flower arrangements may be sent to the funeral home, or donations may be sent to the Wounded Warrior Project at woundedwarriorproject.org/donate
Memories of Cliff may be shared by visiting snodgrassfuneral.com and selecting the obituary. Snodgrass Funeral Home is assisting the family with these arrangements.