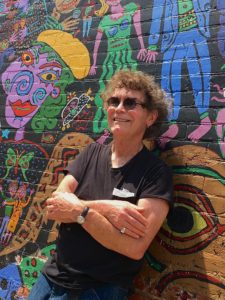 Charly Jupiter Hamilton  West Virginia’s 2020 Artist of the Year, passed away on  September 21, 2021 at home, in the arms of his beloved wife, Rhoda Hamilton, who was both his first and last love. Charly died from complications resulting from exposure to Agent Orange during the Vietnam War.

Charly was born February 24, 1948 in Princeton, New Jersey. The family moved to a small dairy farm in  Troutman, NC. After graduating from high school, Charly enlisted in the US Navy, serving in Vietnam as a Gunner’s Mate aboard the USS Ponchatoula. After his Naval service he studied art history and painting at UNC-Chapel Hill.

Charly moved to West Virginia in 1977 to work as a carpenter following the Tug River Flood. He fell in love with the state, its beauty and people, making West Virginia his permanent home in 1985. During his 35+ years in West Virginia, Charly earned national acclaim for his richly colored, often intricate artwork and his extraordinary renderings of ordinary events. Charly’s art tells stories of West Virginians, the state, its lore, and its history. His art depicts the joys and sorrows of life, including his own sorrow over the 1991 accidental drowning of his son, 21-year-old Sandor, in the New River as well as Charly’s own struggles as a recovered alcoholic.

Charly was an iconic character in West Virginia, known for his art, his poetry and his infectious humor. He reunited with his high school sweetheart, Rhoda Stone and married in 2012. Together, they helped raise Rhoda’s son Sam Belsky to adulthood. In addition to his art, Charly loved his dogs: Wonder, Cotton, Reason and Lula. He also loved to read, especially books on history,  and listen to music from Leonard Cohen to the West Virginia Symphony.

Charly’s art work has universal appeal for young and old alike as he approached his characters with humor and what he referred to as his “wobbly mind”. The New England Art Journal called his style “an expressionistic Appalachian-gonzo primitivism.” Charly’s work has been shown nationally in museums and galleries in Chicago; Boston; Tampa; Miami; Harrisburg, PA; Los Angeles; Washington, DC; and the Tri-Cities area of NC where he went to college and in galleries throughout West Virginia.

Charly’s art has been featured in more than a dozen solo exhibitions and in numerous exhibits with other artists from Martinsburg to Huntington. He has 16 pieces in The Clay Center Juliet Museum of Art’s permanent collection; created a piece celebrating WV’s 150 birthday for the WV Commission on the Arts; a carving, Mamadou, hangs in the US District Court’s art collection; won the 2008 Governor’s Award for Sculpture; and numerous juried exhibitions. Charly’s work can be found on display with the Mountain Stage bandstand, the exterior wall of Charleston’s Habitat for Humanity, and on 3 piers under the I-64 overpass. Most visible is the 60′ x 30′ West Side Wonder Wall Project in Charleston, located on the street named in his honor, Jupiter Way. The Wonder Wall has been featured in a number of newspaper articles about public art projects. Charly used this work to include dozens of local residents as well as cultural icons like Martin Luther King, Vincent Van Gogh, Maya Angelou, and Hank Williams Jr.

Charly’s most touching contribution to the arts was in his interaction with children. As an example he encouraged 100+ children to draw on the 60′ foot expanse of the West Side Mural Project and then incorporated their sketches into the mural. He welcomed children at public venues and looked for opportunities to have them create alongside him, showing children how to discover their own artistic voice and honor their creativity, while encouraging their appreciation of art. One of Charly’s other passions was helping other artists realize they can make a living as an artist in West Virginia. He was especially happy to share the ins and outs of the business of an artist with young budding artists.

Charly was highlighted in the 2021 PBS/HBO documentary Our Towns, exploring how a sense of community and common language of change may help towns find a different path to the future. He was featured in a 2010 documentary, The World According to Charly by Doug Imbroglio; profiled in February-March 2017 West Virginia South magazine, “Drop of Jupiter”; West Virginia Focus magazine, January-February 2015 issue, “Public Art as Public Good”; Celebrated Artists, Students of Marvin Saltzman, published by The Mahler Fine Art Gallery, 2011; South Hills Living magazine, June 2017 issue, “Festivall Artist Brings Art To The Streets of Charleston, WV”; and Public Art, A Personal Guide to Charleston’s Public Art Collection, published in 2012.

Charly was intelligent, funny, had a sharp wit and full of love and joy. Anyone who saw his artwork loved it and those who were fortunate to spend time with him invariably loved him as well. He was blessed to have many friends who loved him and he loved them. He will be missed by many.

A private service to Honor the Life of Charly, will be held at Snodgrass Funeral Home, South Charleston.  Those wishing to, may view the services via live stream by selecting the obituary and selecting the red “live stream” button below the photo, on Friday, October 1, 2021 at 6:30 pm.

A public celebration of Charly’s life will be held from 11:00 am to 1:00 pm, Saturday, October 2, 2021 at the Riverfront Atrium at the Charleston Coliseum and Convention Center.

All who are in attendance at either service will be asked to please wear a mask.

In lieu of flowers the family suggests memorial contributions be made to a charity of your choice.

Memories may be shared on line by visiting www.snodgrassfuneral.com and selecting the obituary. Arrangements are in care of Snodgrass Funeral Home.