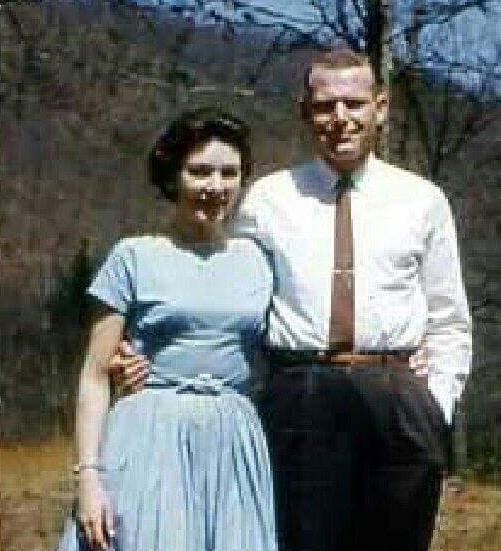 She was born Alpha Naomi Cyfers in April of 1931 at Greenville, WV; the fourth of five children. After a very long illness, Alpha passed away on October 23, 2019 at Redstone Village in Huntsville, AL

He was born Dennis Paul Walker in March of 1925 at Oceana, WV the second of five children. In June of 2016, Paul died from complications of his illness at NHC Healthcare in Charleston, SC. His ashes will be interred in the coffin alongside his wife.

They met after Paul returned home from WWII and married in 1949. Together they raised five children, eventually settling in Nitro, WV. While Alpha stayed at home tending to the needs of their growing family, Paul went to work for the Rueben H. Donnelly Co. and stayed for nearly four decades. Paul and Alpha retired in 1987 and moved to Roanoke, VA to be closer to their family.

Paul discovered golfing later in life, but went on to play many thousands of holes as well as being an avid reader and crossword master. He had a dry wit, incurable sweet tooth and never saw a baby he didn’t love.

Alpha was a creative and talented seamstress and provided her children and grandchildren with elaborate costumes, wedding gowns and baby quilts. She was known to hold a baby on her lap at the sewing machine and let them help “Grammy”. She was also an accomplished Bridge and Duplicate Bridge player and loved to collect and refinish antiques.

Their marriage in 1949 was a candle meeting a flame and became the light that sustained them through 67 years of marriage. They held tightly to one another through the highs and lows of life and are now together again in death.

Thank you for a lifetime of love, learning and laughter, always a bit messy, but a home with a door that never closed. Rest together now in peace for you were and are so loved.

Services will be held at 11AM on Monday, October 28 at Snodgrass Funeral Home in South Charleston with a public viewing from 10 to 11 AM.  Burial will follow the services at Highland Memory Gardens in Pecks Mill, WV

Memories of Alpha or Paul may be shared by visiting snodgrassfuneral.com and selecting the obituary.  Snodgrass Funeral Home is assisting the family with these arrangements.